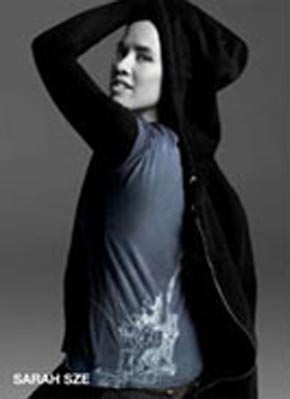 Sarah Sze’s T-shirt is among those designed by 13 “of today’s most influential artists,” a project organized by GAP to celebrate the Whitney Museum of American Art Biennial in New York. Sarah’s work is part of the lives of all Milton students, as her sculpture, “The Edge of One of Many Circles,” created in 2006—a gift of trustee Richard Perry ’73—hangs in Milton’s Schwarz Student Center.

In addition to Sarah, GAP tapped contemporary artists such as Chuck Close, Jeff Koons, Kiki Smith and Hanna Liden to design the shirts; all 13 artists have exhibited at earlier Whitney Biennials. The Whitney Biennial is a special exhibition, held every two years, featuring the most important contemporary art in the United States; GAP is a sponsor of the 2008 Biennial.

GAP’s Web site that features the Artist Editions offers a profile of Sarah Sze: “Sze’s sculptural aesthetic has presented ephemeral installations that penetrate walls, suspend from ceilings and burrow into the ground. She was awarded a Macarthur Fellowship (the “genius” grant) in 2003, and has exhibited in many international institutions over the past decade. Sze’s work can be found in both public and private collections world wide, including the Museum of Modern Art in New York, the San Francisco Museum of Art, and the Foundation Cartier in Paris.”