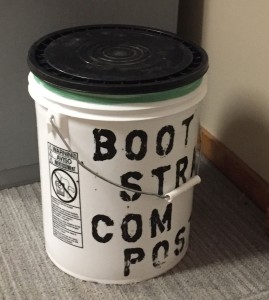 Patrick Huang (II) of Wolcott House, and Daniel Xiao (II), who lives in Forbes House, noticed a problem that irked them: When their friends and dorm mates took food back to their rooms from the dining hall, the food waste was discarded into regular trash cans, for lack of a more sustainable alternative. The two boys wanted to do something about it. This spring they are leading a pilot composting project in both Wolcott and Forbes houses. They’ve launched this program in the same year that Milton’s dining services implemented a composting system in the dining halls, as part of the School’s broader sustainability initiatives.

“We started thinking about how we could harvest what was being thrown away in the dorms and give it back to the Earth,” says Daniel. “Patrick and I started working with chemistry teacher Mr. Moore and looking at costs and logistics.”

The boys researched composting companies and decided on Bootstrap Compost, a residential and commercial “food scrap pickup service” operating in Greater Boston. Mr. Moore met with the two students regularly to discuss their plans and to work on a presentation to School administrators. “Daniel’s and Patrick’s commitment was excellent. They showed patience, grit and diplomacy throughout the process,” says Mr. Moore.

Facilities Services and Milton’s Business Office approved their plan, and the two began a trial run of the initiative in February. They placed one Bootstrap composting bucket on each floor of the dorm to collect vegetables, fruits, grains, and the dining hall’s compostable paper plates and utensils. Each week, Patrick and Daniel move the buckets to a designated pick-up location for collection by Bootstrap. A long-term goal is to receive composted soil back from Bootstrap for the School’s gardens.

“We didn’t go into this thinking it’s the final solution,” says Patrick. “We want to see how well Bootstrap works with the Milton environment and what adjustments we need to make as problems come up.” The boys developed signage to inform students about what could and could not be composted, and they worked on getting the message out.

“In Forbes, we saw a lot of participation really quickly. Most of the composting bins were reaching max capacity,” says Daniel. “We were really happy with those results.” It turned out, however, that the placement of the buckets—next to built-in trashcans—was considered a fire hazard. Daniel had to relocated the compost bins in his dorm to areas that are not as successful. The students are working with the house head to find a solution.

In Wolcott House, no fire hazard issue existed, but the program requires a culture—and mindset—shift. “Student participation is not as strong as I want it to be,” says Patrick. He realizes they’re trying to combat a habit, of students throwing everything in the trashcan. “The compost bins have lids, which is kind of a mental hurdle that each person has to overcome,” Patrick says.

This pilot project will run through the end of the school year. Bootstrap’s founder says that it “typically takes two to three months for people to fully embrace the service. Over time, compost skeptics will buy into the process.” Daniel and Patrick are working harder on communicating about the project to their peers. They hope the project leads to brainstorming of other sustainability ideas on campus for students to be involved in, including adding more dorms to the compost project.