Taking Performance to the Next Level: Workshop Introduces Cutting-Edge Technology to Milton’s Dancers 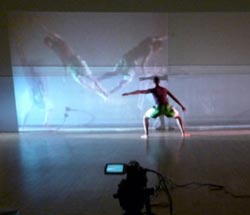 New York-based composer, Daniel Iglesia, visited campus to conduct a workshop for Milton dancers in the Kellner Performing Arts Center on Monday, May 18. Daniel creates performance events that combine live audio and video mixing using cutting-edge computer models he creates himself. He and performing arts faculty member, Tze Chun, have collaborated on a number of projects to combine his video and music events with Tze’s dance choreography.

“I thought it would be exciting for the students to use technology to expand the possibilities for performance,” said Tze.  “Daniel [Iglesia] and I held a workshop for interested students and faculty, in which they created small movement phrases that Daniel then replayed with different effects and layers.”

Daniel Iglesia writes for humans, computers and broad interactions of the two. He is especially interested in live manipulations of sound, with notions of automation and algorithmic composition, the magnification of inherent chaos in sounds, and real-time performance with traditional instruments. Since working in New York, he has expanded his interests to the interaction of sound and video, creating both live performance systems and generative pieces that subsume the role of the creator. His work has been presented throughout New York City—in such diverse venues as the Lincoln Center, Eyebeam Gallery, the Stone, Ontological-Hysteric Theatre, Merce Cunningham Studio, Roulette, the Public Theater, the Delancey and the Knitting Factory—and international festivals in the United States, France and Spain. A graduate of Princeton University, Daniel is a teaching fellow at the Columbia University Computer Music Center.