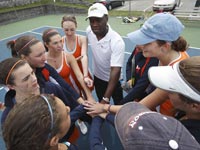 The girls’ tennis team matches their stellar season (11–2) on the courts by their courtesy and sportsmanship this spring. “As a coach, I stress the importance of being a great sportsman first and a great player second. You have to respect your opponent,” says Coach Troy Crichlow ’99.

Coach Crichlow attributes the team’s winning record to his nine varsity players working hard in practice, focusing on conditioning, and learning how to compete at the top level.

The team, known in the league for their talent and grace on the court, is led by Captains Lexi Lazares (I) and Natasha Bhasin (I). Rising players Abby Lebovitz (III) and Mary Brown (II) are likely to sustain Milton’s role in the ISL.

Sophie Panarese ’11 set the standard during her Milton tennis tenure, Coach Crichlow asserts. Last spring, Sophie received the William Hoblitzelle Award, given to the USTA New England girls’ 18-and-under player who best demonstrates a superior blend of sportsmanship and leadership on and off the court. She is now studying and playing tennis at Georgetown University—Coach Crichlow’s alma mater.

With one match to go, the girls expect a strong finish to the season, and the team’s younger contingent looks forward to seasons ahead.