Tea, Drugs and Money: Dr. Eric Dolin on the Seeds of U.S.-China Trading 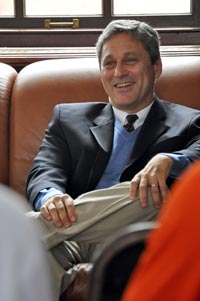 Dr. Eric Jay Dolin is an environmental scientist, a researcher and a writer. His most beloved role, however, is storyteller. Dr. Dolin, presenter of the 2014 Hong Kong Lecture, told students the story of how America’s trade relationship with China began. His most recent book, When America First Met China: An Exotic History of Tea, Drugs, and Money in the Age of Sail, chronicles the period following the American Revolution through the mid-19th century with tales of the tea, fur and opium trade, clipper ship travels and life in the seaport of Canton.

“During this period, trading between the United States and China was significant, but not particularly important economically or to American policy makers,” says Mr. Dolin, Milton’s fifteenth Hong Kong Speaker. “Things could hardly be more different today. China is the second largest trading partner behind Canada to the United States, accounting for 14 percent of America’s foreign trade. Once measured in tens of millions of dollars, today the China trade is measured in hundreds of billions of dollars and it’s one of the critical policy issues of the United States.”

Watch his talk in the FCC.

Growing up near the coasts of New York and Connecticut, Mr. Dolin is fascinated by the ocean and the natural world. In college he wanted to become a malacologist (a seashell scientist). At Brown, however, he shifted course toward environmental policy, earning a master’s degree in environmental management from Yale, and a Ph.D. in environmental policy and planning from MIT. His recent bestsellers illuminate tales of human history taking place on and across the seas. Mr. Dolin has published ten nonfiction books and more than 60 magazine, newspaper and journal articles. His national bestseller, Fur, Fortune, and Empire: the Epic History of the Fur Trade in America, was a top nonfiction book of 2010; and Leviathan: The History of Whaling in America, was named a best nonfiction book of 2007 by the Los Angeles Times and the Boston Globe. His writing has garnered dozens of awards.

The Hong Kong Distinguished Lecture Series brings to campus speakers who raise awareness about issues of concern in Asia and help us better understand the cultures, art, and history of Asian countries, which are home to many of our students. Former trustee, Helen Lin, Class of 1981, along with more than 100 graduates living in Hong Kong, established the series in 1998.