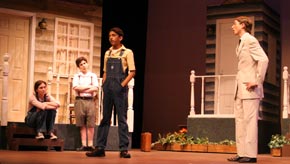 On the evenings of November 2-4, the curtains of the King Theatre stage rose for the Class of 2010’s production of To Kill a Mockingbird, the well-known novel by Harper Lee adapted to the stage by Christopher Sergel. The cast and crew presented a moving production to the applause of a full house each night. Director and performing arts faculty member, Pam McArdle, said of the production, “Long a Class IV tradition, the play is comprised of ninth-graders who spent many weeks perfecting their roles. The talented cast and crew dedicated themselves to this production, which was so well received by the community. Thank you to all who came to see it!”