The Diary of Anne Frank, A Play About Hope 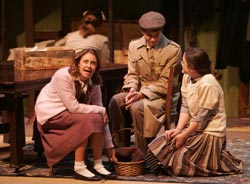 “We cannot change what happened anymore. The only thing we can do is to learn from the past and to realize what discrimination and persecution of innocent people means. I believe that it’s everyone’s responsibility to fight prejudice.”
– Otto Frank, Father of Anne Frank

Playwrights Frances Goodrich and Albert Hackett based the original version of The Diary of Anne Frank on Anne’s diary entries, but her words were heavily edited and guarded by her father, Otto Frank. The present script, adapted in 1999 by Wendy Kesselman, introduces new material from Anne’s unedited diaries and fleshes out her true personality during her twenty-five months spent hiding in the upstairs annex. Though describing a harrowing time for the residents of the annex and their helpers, the play is nevertheless hopeful and, at times, funny. Director Debbie Simon says, “To me this play is about hope. The hope I see that the residents had in their hearts everyday in hiding; the hope that Miep Gies and Mr. Kraler displayed as they worked diligently to ensure their friends’ survival, and the hope that Mr. Frank expressed when he gave his daughter’s diary to the world to remind us all to look for hope even in the bleakest of times. [The cast, crew and I] have understood from the beginning that this play deserved our respect and attention, and we have tried to honor the people ‘for whom we speak.’”

Milton’s production of The Diary of Anne Frank will take place in Ruth King Theatre on Thursday, November 1 and Friday, November 2 at 7:30 p.m. and Saturday, November 3 at 7 p.m. Please purchase tickets by contacting Dar Anastas atdarlene_anastas@milton.edu.