The Favorite “DYO” Experiments: On Exhibit at the Science Symposium 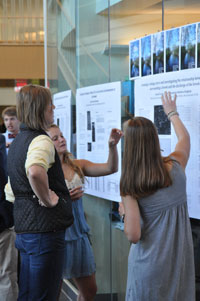 Milton’s second annual Science Symposium showcased advanced science students and their DYO (Design Your Own) experiments in the Pritzker Science Center. Faculty and friends gathered around the young scientists presenting their work.

Students structure and conduct experiments that explore all major areas of science and diverse hypotheses. They work independently on their questions for three to five weeks. The experiments range from examining road salt run-off in a local brook to the physics of ocean waves, from the effect of carbon dioxide on mung bean germination to the effect of changing frequencies on a cornstarch concentration.

Ashley Bae (I) and Ben Scharfstein (I) talked to the audience about the value of the DYO experiments.

“The coolest part about the DYO for me is designing the entire lab from start to finish,” says Ben. “The labs we conduct throughout the year are integrated into the day-to-day curriculum, which means that labs have a specific objective in mind. The goal of the DYO, however, is slightly different. Instead of focusing on a specific topic for a certain reason, the DYO is meant to get us excited about science and force us to use all of the skills we have learned during the year.”

Ashley’s advanced biology experiment was titled “Planarian head regeneration: the impact of bioelectric stimulation.” She also worked on another experiment with classmate Walton Lee (I) that examined stream water pollution.

“Because of the science immersion the DYOs have provided me, I know I want to pursue a career in scientific research,” says Ashley.