The Importance of Being Earnest This Winter 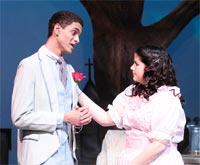 Milton actors serve up wit and hilarity as they presentThe Importance of Being Earnest: A Trivial Play for Serious People. Oscar Wilde’s play is an intellectual farce of two best friends leading double lives that intertwine in comedic ways in Victorian England.

Dar Anastas, performing arts faculty member and director of the winter production, says, “each student brings something unique to the stage, which adds to an already great piece of literature.”

This season’s production of The Important of Being Earnest runs in Ruth King Theatre on Thursday, February 9, and Friday, February 10, at 7:30 p.m., and on Saturday, February 11, at 7 p.m. For tickets, contact Dar Anastas atdar_anastas@milton.edu.