The Importance of “Going Green” 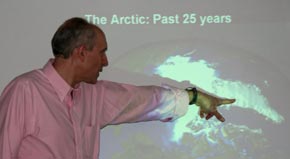 Climate change has become a pressing topic of conversation, especially in the wake of former vice president Al Gore’s documentary, An Inconvenient Truth, which illustrates humanity’s impact on global warming. Nick d’Arbeloff ’79, executive director of the New England Energy Innovation Collaborative, is a “Gore trainee,” as he told students during a visit on April 24. He “studied in Nashville under the climate master himself” and travels the country explaining the causes of global warming and what must be done to slow its effects.

In his presentation, “Global Warming: Truth and Consequences,” Nick described many of the scientific and geological findings noted in the movie. He also illustrated the effects of a continually warming climate—from heated oceanic temperatures leading to stronger storms to the surge of infectious disease carrying species normally held in check by a certain number of “frost days.”

Nick graduated from Georgetown University and immediately dove into the technology field, an area that has shaped his professional career. Nick explained that technology has enlarged our carbon footprints, but that it will also be an essential tool in reversing the damage. “Technology has allowed us to be incredibly efficient at harvesting foodstuffs from the land, but we have to be mindful of the fact that continuing in this manner will have devastating effects down the road.” Nick showed a photograph of what a “tractor” used to be—a yoked mule—and compared it to today’s multi-ton, multi-horsepower machines.

The good news is that alternative energy technology is growing at a more rapid pace than ever before. We must now focus our attention on maximizing these earth-friendly energy sources, such as solar power. For instance, as Nick pointed out, Germany—which is 3.9 percent the size of the United States—claims 57 percent of worldwide installed solar panels. The U.S., which has an exponentially greater solar landscape profile, has only 7 percent of these installed solar panels. We must do the work of evening out these imbalances.

“While this information, especially presented en masse, can seem bleak, we are not beyond hope here. We can do something to stop this trend,” Nick claims.