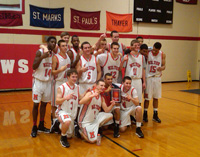 Milton’s boys’ varsity basketball team earned first place in the holiday tournament held over the weekend at St. Sebastian’s School. This is the second year in a row the Mustangs have won the tournament.

“This was by far the most impressive victory I’ve seen as the basketball coach here at Milton,” said Head Coach Lamar Reddicks. “I couldn’t be any happier with or prouder of our boys. They played extremely hard in all three games.”

The Mustangs clinched the top spot at the two-day tournament with an outstanding win (71-49) against a strong Kent School squad.

Travis was named to the All-Tournament team and Dennis was named the Most Outstanding Player of the tournament.

“Although two of the boys were honored, the team’s success really was a total team effort all tournament long,” said Coach Reddicks. “Each member of this team had something to do with this championship, which makes it very special.”

The girls’ varsity basketball team also did well in tournament play this past weekend, placing fourth in the first annual Nickerson tournament, which was held at both Milton and Nobles.