The Mustangs Wrap Up the Season on a High Note 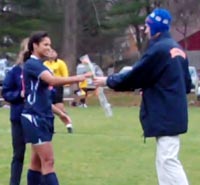 A week of costumes and spirit events led to the most anticipated weekend of the sports season: Milton Nobles Day. The rain that made the fields soggy didn’t dampen the excitement or the fierce competition. Milton teams tied or won against the Nobles contenders in nine of the eleven contests.

Milton varsity girls’ soccer team finished their regular season play with a 3–2 win over Nobles. Facing a point deficit of 2–0 in the first half of Friday’s game, Coach Peter Kahn said the girls “found renewed energy and kept fighting.” The team came back with goal-scoring shots from Jackie Hannigan (I), Shannon Reilly (III) and Isabel Lester (II) and strong assists from Megan Kim (III) and captain Beverly Leon (I). The combined team effort rounded their season record to a respectable 12–3. Coach Kahn presented flowers to each of his players, thanking them for their dedication, hard work and positivity throughout the season.

This win advances the team to the New England Championship Tournament. The girls will face Greenwich Academy at Pomfret School at 2 p.m. on Wednesday, November 18.

Milton’s other varsity teams also put up strong efforts against the competition this weekend. Mustang football beat Nobles 28–8. Click here to view a video of Charlie Storey (II) rushing for Milton’s first touchdown of the day. Both the field hockey and boys’ soccer teams tied their games, 1–1 and 3–3 respectively.