The rare, the hip, the crazy, the fun
Swap-It is a fall tradition at Milton 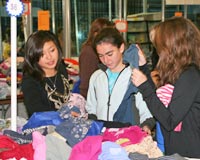 Who doesn’t welcome the chance to step out for an elegant evening looking just splendid? At Milton, Swap-It is both the means and the end. Whether it’s a funky purse or an outrageous scarf, plaid pants or shimmering skirt, clothing you can only dream about is available on a student’s budget at the well-loved indoor yard sale called Swap-It. Nearly a decade ago, a sharp organizer scheduled a dance on the biggest day of the sale, and costumes-by-Swap-It became de rigueur.


Of course many among us, students included, buy serious things at Swap-It, too. The enormous sale features many treasures—outerwear and sports gear, books and games, furniture and designer clothing—that have all been donated by members of the Milton community. Teams of K–8 parents accept, sort, price and organize the thousands of donations that pour in during the days before the sale, then manage the crowds and the cashiering.

This year Swap-It celebrates its sixtieth birthday. Led by a faculty spouse (Mrs. H. Adams Carter), and a team of Lower School parent volunteers, it began in 1950 as a sale to finance the furnishing of a new Junior Building. Swap-It chairpersons, and generations of volunteer workers, have enhanced the sale year after year. It burgeoned out of earlier quarters (Thacher Room in Ware Hall, to various gymnasiums, and finally to the ice rink of the Athletic and Convocation Center) and became the fall community service work for a legion of parents. Last year, K–8 Principal Marshall Carter transitioned Swap-It’s proceeds to support curriculum and faculty professional development, rather than equipment and supplies. Still a cultural hallmark of the fall at Milton Academy, Swap-It will open this week. If you’re nearby, find something you need. Swap-It is open to the public: