Theodorick B. Bland is Milton’s Twelfth Head of School 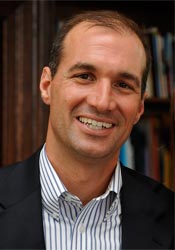 This July, Milton Academy welcomes Mr. Theodorick (Todd) B. Bland as he begins his tenure as the Academy’s twelfth head of school. Mr. Bland has already been enthusiastically greeted with early welcomes on campus. He visited twice this spring, and joined the events of Reunion Weekend. On June 15, he and his family moved into the head of school’s house next to the Pritzker Science Center. Making his way around campus, stopping into offices to visit faculty and staff busy during the summer, Mr. Bland is thrilled to begin a much-anticipated role at Milton.

Mr. Bland’s career has been devoted to independent education—teaching, coaching and serving in administrative leadership positions—since his graduation from Bowdoin College in 1990. Over the last eight years, he has served at the Seven Hills School, a K–12 school with 1,060 students in Cincinnati, Ohio. Mr. Bland’s parents graduated from Milton and his father is memorialized in the Apthorp Chapel. He attended boarding school himself.

Mr. Bland, his wife Nancy, and their family are settling into the head of school’s house, and the entire Bland family is looking forward to being immersed in the life of the School quickly. Mr. Bland’s son Nick begins Class IV next fall, and his daughters Emily and Maggie join eighth grade in the Middle School. Both Todd and Nancy Bland anticipate engaging actively in all aspects of life at Milton.