Theodorick (Todd) B. Bland Will Be the Twelfth Head of Milton Academy 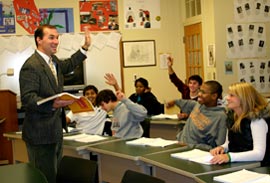 The Milton Academy Board of Trustees is pleased to announce that Mr. Theodorick (Todd) B. Bland will become the twelfth head of the Academy on July 1, 2009. Todd Bland’s swift rise as a gifted, energetic and visionary school leader recommends him particularly for head of school at Milton, where academic excellence and developing strong, independent thinkers has been a centuries-long tradition. Mr. Bland’s career has been devoted to independent education—teaching, coaching and serving in administrative leadership positions—since his graduation from college in 1990. Over the last eight years, Mr. Bland has served at The Seven Hills School, a K–12 school with 1,060 students in Cincinnati, Ohio. At Seven Hills, Todd has been assistant head of school (2001-2002), head of the Upper School (2002–2007), and now serves as interim head of school. “We are delighted to welcome Todd to Milton; he is a leader who is highly esteemed by his community and his peers,” said Franklin W. Hobbs, president of the board of trustees. “Todd’s successful experiences in three schools earned each community’s trust and confidence as he assumed numerous roles integral to the schools’ strength and effectiveness. He will build upon Milton’s traditions and closely held values.”

“I am thrilled with the prospect of joining the Milton Academy community and working with Milton students, faculty, staff, parents and alumni,” said Mr. Bland. “My family roots in Milton’s history and my career in independent schools have led me to an abiding respect for Milton’s academic strength and vibrant educational environment. That sense of Milton was more than confirmed when my wife, Nancy, and I visited Milton, experiencing for ourselves the excitement and vitality of campus life. Helping the community fulfill Milton’s mission—to cultivate a love of learning and a respect for others; to embrace diversity and the pursuit of excellence—is a commitment I am eagerly anticipating. I look forward to engaging in the full life of an extraordinary school.”

“We are all grateful for the devoted leadership over the last two years of Mr. Rick Hardy, interim head of school, Upper School principal, and veteran faculty member from the English Department, who has positioned Milton well for the next phase of its history,” said Mr. Hobbs. “Along with the faculty and administration, Mr. Hardy has furthered projects crucial to Milton’s continued progress, including launching the building of the new Pritzker Science Center; raising capital and annual funds; implementing a new K–8 division; and initiating work on new communication strategies among the board, the administration and the faculty.”

Milton’s next head of school began his educational career as an intern in 1990–1991 at Belmont Hill School, teaching history and coaching. Mr. Bland taught Spanish and coached the following year at Beaver Country Day School, and then returned to Belmont Hill, where he assumed several roles until his departure in 2001. For eight years he taught history in grades 7–10, advised ninth grade students, and coached varsity lacrosse. As an administrator, he was director of public relations (1992–1994), director of financial aid and associate director of admissions (1992–1996), and then director of admissions (1996–2000). Following a sabbatical year at Harvard (2000-2001), where Mr. Bland earned his master’s in education with a focus in administration, planning and social policy, he moved on to The Seven Hills School.

Mr. Bland graduated from Bowdoin College, with a double major in History and Spanish and a minor in Government and Legal Studies. His culminating senior papers focused on the Civil Rights Movement (specifically the life of Stephen Bingham, Milton Academy Class of 1960) and the writing of the Peruvian novelist Mario Vargas Llosa. He was a four-year letterman in lacrosse, captain and MVP.

Todd Bland’s parents both graduated from Milton in 1958. His father was a professor of colonial American history at Bowdoin College in Maine; his mother was a teacher of United States History in the Massachusetts public schools. Mr. Bland’s father died when he was a child, and is memorialized in Milton’s Apthorp Chapel. Mr. Bland’s stepfather was a chaplain at St. Alban’s School in Washington, DC, and then headmaster of several schools from San Francisco to New York City.

Mr. Bland was born in Boston and grew up in Brunswick, Maine; Washington, DC; and San Francisco. He attended St. George’s School where he was school prefect, a three-sport varsity athlete, and lacrosse All-American. Todd Bland is married to Nancy Frost Bland who has been a teacher, advisor and coach (Lawrence Academy, Pingree School, and St. Xavier High School) and anticipates continuing an active life in the Milton Academy community as she has at Seven Hills. The Blands have three children: Nicholas (13), Maggie and Emily (both 12).