God of Carnage in Wigg Hall 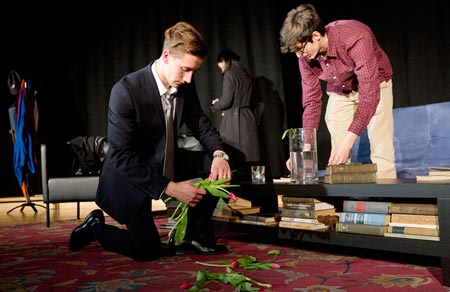 The fall performing arts season closes with an intense look at friendships, marital relationships and parenting in God of Carnage, a play originally written in French by Yasmina Reza. This is a 1212 play, a 30-year Milton tradition featuring intimate productions with small casts, minimal technical demands, and challenging material for both actors and audience.

The play begins with two couples having a meeting about a hitting incident between their two children. The four students playing these challenging roles are Katherine Pratty (I), Joy Lee (II), Peter Duke (II) and Silvio Rossi (I). Performing arts chair Peter Parisi is directing the play along with Alex Gistis (I). Mr. Parisi says there are “interesting dynamics that play out between the characters with layers to the text where they are not saying what they mean.”