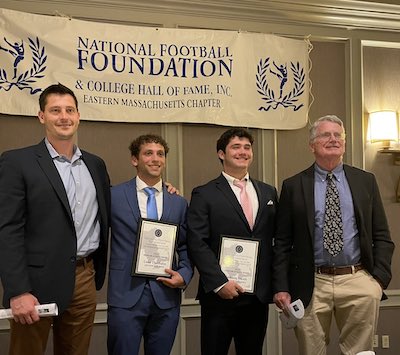 For the first time, three seniors on Milton’s varsity football team were named Scholar-Athletes by the Eastern Massachusetts Chapter of the National Football Foundation and Hall of Fame. Sam Jaffe ’22, Luke Thorbahn ’22, and Jackson Smith ’22 were recognized for excellence on and off the field.

“The award honors athletes who are not only great football players, but great students, and great kids,” said head coach Kevin MacDonald. “It’s also about the contributions they make to the school and the community at large.”

That three students, not two, were selected from Milton is “unprecedented,” and speaks to the caliber of the honorees, who proved to be great leaders for the team, which won the Independent School League in the fall, said MacDonald. Smith and Jaffe were the team’s captains.

Thorbahn said the award is a “tremendous honor” for him, and credited his parents for always stressing the importance of academics.

“I have always taken pride in doing well in the classroom,” he said. “I am thankful my parents set an example for me when I was younger. No matter how many sports I was playing at the time, I had to be doing well in my classes to continue playing. I’m well aware of the fact that you can’t play football forever, but when I look back on my journey, I was able to use the game I love to get an education that will last my whole life.”

Winning back-to-back ISL championships—Milton won the league in 2019, and the 2020 season was canceled due to the pandemic—in undefeated regular seasons taught Jaffe the importance of leadership and trust.

“I will take the model that the former captains showed me, and hopefully what Jack and I showed the team this year, into my future life and career,” he said. “The award is a validation to me that the work I put into my sport and my schooling is now paying dividends, which is amazing to see.”