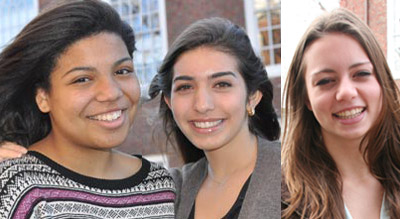 Three students are hitting high notes with their recent musical accomplishments. Ilve Bayturk (III) earned first prize for her performance in the Concerto Competition at the South Shore Conservatory in January. Violinist Sydney Adedamola (III) and vocalist Alé Gianino (II) were selected to participate in the Massachusetts Music Educators Association All State Festival in March.

Ilve played Dmitri Shostakovich’s Concerto #2 First Movement Allegro during the competition. She is a seasoned competitor at the Conservatory, earning placements in her past five appearances, including last year’s Overall Winner award.

Both Ilve and Sydney play for Milton’s Chamber Orchestra under the direction of music department chair Don Dregalla. Sydney has been playing violin for 12 years, and this will be her first appearance at the All State Festival—a weekend-long event culminating in a final orchestral performance at Boston Symphony Hall. Students audition at district events to earn a spot.

Alé is the only Milton singer who auditioned for All States, and she will sing with the chorus at the final concert. Alé has recently performed in some notable showcases. Last spring, she played Velma in Milton’s production of the musical Chicago. In January, she sang the National Anthem at the Frozen Fenway ice hockey game between Milton and Nobles. And last summer, she made it through three grueling rounds of American Idol auditions before performing for the famous judge trio of Jennifer Lopez, Steven Tyler and Randy Jackson. Though she didn’t get the pass to move on to the Hollywood rounds, her dedication to her talent has not wavered. She is looking forward to the All State Festival.

“Everyone [at the festival] is so well trained,” said Alé. “At the districts, I felt surrounded by the best of the best. I’m excited to see even more talent at the All States.”