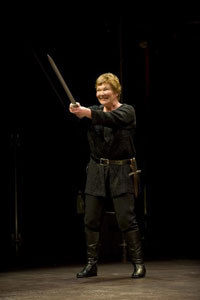 Ophelia. Juliet. Lady Macbeth. Actor and director Tina Packer brings her intimate knowledge of these and other female characters from Shakespeare’s oeuvre to campus this week as the Melissa Dilworth Gold Visiting Artist.

Ms. Packer, the founding artistic director of Shakespeare & Company based in Lenox, Massachusetts, arrives March 7 and meets with faculty and school staff, having dinner with Head of School Todd Bland. On March 8, Ms. Packer will conduct workshops with Grade 6 and Class IV students.

Throughout her four-day visit, she will work with individual drama classes, and on Wednesday evening, Ms. Packer will present Women of Will—her performance that includes a range of Shakespeare’s female roles. This groundbreaking exploration of Shakespeare’s canon is a combination of performance, discussion, and a bit of crowd participation. It is a summation of Ms. Packer’s more than 30 years of deep investigation into all things Shakespeare. Local Milton residents, senior citizen groups, and residents of Brookview House are invited to attend the performance. An informal reception will follow in Pieh Commons in the Kellner Performing Arts Center.

On Thursday, March 10, Ms. Packer will discuss and perform Othello with two sections of Class IV English and attend a Drama class.

At Shakespeare & Company, Ms. Packer has directed—among others—Othello, King Lear, Macbeth, Coriolanus, Richard III, The Merchant of Venice, A Midsummer Night’s Dream, Julius Caesar, and the world premieres of several original works. As an actor, she has recently performed to critical acclaim as Gertrude (Hamlet), Cleopatra (Antony & Cleopatra), Edith Wharton and Shirley Valentine. She trained at the Royal Academy of Dramatic Art, where she won the Ronson Award for Most Outstanding Performer. She has also worked for the BBC and ITV television companies, and in film. Ms. Packer is the author of Tales from Shakespeare and co-author of Power Plays: Shakespeare’s Lessons in Leadership & Management, and has lectured and directed at Columbia, Harvard, and M.I.T.