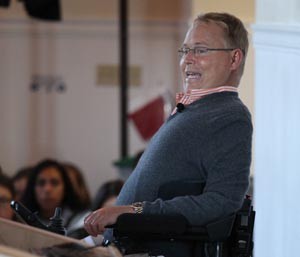 Twenty years ago, Travis Roy became paralyzed from the neck down when he hit the boards 11 seconds into his first college hockey game. With students on Wednesday, Mr. Roy spoke impassionedly about setting goals, meeting challenges, showing respect, and the power of love.

He spoke about his earliest memories of skating on the frozen ponds around Yarmouth, Maine, where he grew up. Hockey became his passion. One night, during his freshman year of high school, he wrote down three goals: play for a Division I college team, play for the NHL, and play for the U.S.A. Olympic team.

“From that night on, I had a path. I knew where I wanted to go, and I just had to put in the effort,” says Mr. Roy, who spent many nights alone on an ice rink practicing his skating and shooting skills.

His father reminded him that his first goal required good grades, so Mr. Roy, who struggled with a learning disability, worked hard on maintaining a solid B average. During his junior year, he transferred to Tabor Academy and played two years of prep hockey before he was recruited to Boston University. When his shoulder was tapped for him to get on the ice in that first college game, he had achieved his first goal. Despite his life-changing injury that followed seconds later, Mr. Roy says today, “I had made it. And no one could take that away from me.”

He told students that having goals is the best way to stay motivated, and that two factors are key to achieving them.

“One: You need the desire to find out how good you can actually be. No matter what you are—a musician, a scientist, an artist—ask yourself, ‘How good can I be?’ You also have to have pride in yourself and know that you tried your best, no matter what your best is.”

Life as a quadriplegic gives Mr. Roy a unique perspective on life, he says. He credits the love of friends, family, and even complete strangers for keeping him anchored and focused. He still writes down his goals. He established the Travis Roy Foundation in 1997, to help spinal cord injury survivors and to fund research toward developing a cure. He is the author of Eleven Seconds and travels the country sharing his story and message with audiences of all ages.