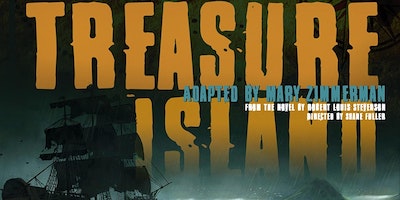 A swashbuckling tale of pirates, sword fights, and buried gold will take the stage in the chapel tent this week, as the Performing Arts Department presents Treasure Island.

Directed by performing arts faculty member Shane Fuller, Treasure Island is based on the novel by Robert Louis Stevenson and adapted for the stage by Mary Zimmerman. It tells the story of Jim, the son of a tavern owner, who finds a mysterious treasure map among the possessions of a sailor who died at the tavern. Jim sets sail with some trusted local friends to locate the island and the treasure—and they’re accompanied by a covertly mutinous crew of pirates, including the ship’s cook, Long John Silver.

“It’s a fun show,” Fuller said. “There’s a little bit of sword-fighting, there’s pirates, there’s a lot of adventure. We didn’t want to do anything too serious or too heavy, because this is the first season that we’ve had live on campus in almost two years.”

Because of the pandemic, all of this fall’s shows will be in tents on campus—masks are required for all audience members—which presents an interesting challenge for the actors and crew. Faculty members Evan DelGaudio and Darlene Anastas are assisting the Treasure Island production with lighting and stage design, respectively. All 11 students in the cast each play multiple roles.

“The whole cast has to be a true ensemble,” Fuller said. “The show moves from place to place, so the cast members have to move the set pieces around and recreate the environments. It’s been fun, it’s a different kind of experience.”