Trustee Erick Tseng ’97 Asks, “What Would You Do If You Weren’t Afraid?” 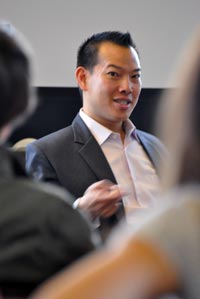 With a mischievous smile, Erick Tseng ’97 took the Asian stereotype head-on as he described defining moments in his career and personal life to students. Erick, who was on campus as the 14th Hong Kong Distinguished Lecturer, joined Facebook as head of mobile products and is a Milton Academy trustee.

“I stand before you today a living, breathing stereotype—the perfect personification of an Asian,” he said, as a childhood photo of himself and his younger sister appeared on the screen. “I am the ‘model minority.’ In fact, I’m the super-model minority. I am the Gisele Bundchen of Asians,” he joked before he explained why the Asian stereotype—of an obedient, violin-playing, math whiz—has to go.

“Stereotypes are mass generalizations that have been exaggerated to such breadth that they fail gloriously at describing anything or anyone,” he continued, “but you all know this. I am here to ask you a simple question—a question that can come in handy if you ever face prejudice, but can also help in all kinds of situations: What would you do if you weren’t afraid? This question challenges us. It forces us to think about our action and how we respond to difficult situations, but it also compels us to think boldly and, if I may, dares us to be true.”

Erick told students about three defining moments where he challenged himself, professionally and personally, with that question and moved ahead fully aware that failure was a real risk. He explained how using that question helped him choose to develop the Android platform at Google. It also prompted him, on one of his “adventure trips,” to take advantage of a chance encounter on a dark street in Jerusalem that ultimately included him in a high-security Christmas Eve mass at the Church of the Nativity in Bethlehem—because he decided to say ‘yes’ to what seemed like a crazy, potentially dangerous, idea.

“So, what would I do now if I wasn’t afraid? I would show the world there is no such thing as ‘model minority.’” Powered by that goal, he is establishing an Asian arts festival that highlights talented Asians in wide-ranging roles such as film directing, producing hip-hop, and writing poetry.

He reserved time before concluding to ask students to rise and tell others what they would do if they weren’t afraid. A host of students ventured their answers—from trying out for a play, to resolving conflict in Nigeria, to asking a certain someone to Boat Dance, to running for head monitor.

Erick attended M.I.T., where he earned his bachelor’s and master’s degrees in computer science and electrical engineering. He earned an M.B.A. from the Stanford Graduate School of Business, where he graduated with top honors as an Arjay Miller Scholar. Before joining Google, Erick was an associate at McKinsey & Company, a management consulting firm. He has also held product management and engineering positions at Microsoft, Yahoo, and the M.I.T. Media Lab.

The Hong Kong Distinguished Lecture Series, established in l998, brings a speaker to campus to raise awareness about issues of concern in Asia and to help us better understand the cultures, art, and history of Asian countries, which are home to a number of our students. Former Milton trustee, Helen Lin, Class of 1981, with more than one hundred graduates living in Hong Kong, led the effort to establish the speaker series.