On January 31, 2009, The Milton Academy Board of Trustees elected Franklin “Fritz” W. Hobbs ’65 trustee emeritus and recognized his leadership as board president from 2002–2009. At the same meeting, the board elected Bradley M. Bloom as the new president. 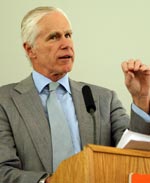 On January 31, 2009, the Milton Academy Board of Trustees expressed their gratitude for the loyal and vigorous service of Franklin W. Hobbs ’65, a member of the board since 1990, and president since 2002. Fritz Hobbs’ unwavering commitment to the pursuit of excellence has enhanced Milton’s strength and distinction over the last 18 years. Fritz advanced those characteristic attributes of a Milton education that are shared and valued by generations of alumni, as well as today’s students, faculty and parents: intellectual excitement and challenge; numerous opportunities for personal growth; relationships with diverse and remarkable faculty mentors and classmates.

During these economically challenging times, when educational institutions around the world are considering how to sustain their core enterprises, Milton’s recent financial achievements are particularly relevant. At Milton, we can honor our priorities and respond to this environment with care from a position of far greater financial stability today than in the past. Just last November, Milton celebrated having raised over $85 million over the last five years for crucial projects such as taking a leadership role in science education; prior to that, as a steering committee member, Fritz helped shape the $60 million Challenge to Lead Campaign that concluded in 2000. During his tenure, Milton’s endowment experienced unprecedented growth, more than doubling in value; and operating budgets have uniformly been balanced. At the same time, Fritz and the board have prioritized faculty salaries: Over the last five years, faculty compensation at Milton has moved from fourteenth, to a ranking of fifth, among its forty peer Eastern prep schools. Drawing attention to the need for sustaining the quality and character of the student body by expanding financial aid has been a particular point of emphasis for Fritz and for the board, as well. Fritz has been both immensely generous to Milton and a driving force behind this overall progress.

Fritz also centered his prodigious energy on the student experience. His unannounced drop-ins to talk with students in Forbes’ dining hall, house common rooms, the Schwarz Student Center and along various sidelines, gave him an ample supply of frank and discerning commentary, and always fueled more questions of his own. He was unfailingly interested in the strength of academic, extracurricular and advising programs; the diversity and academic talent of our students; the quality of the boarding experience; the confidence that Milton students feel about being themselves. The board’s decision during this time to rebalance the enrollment of the Upper School involved commitments that have enhanced the educational experience of all students. Milton’s campus life is active and full, whether in the classrooms, the arts, sports or all kinds of activities: from Boston, across the country, and around the world, bright, proficient students contribute to a uniquely vibrant and exciting school life. Enhancements in campus life have helped the admission office shape Milton’s entering classes with more geographically diverse students than ever before; moreover, entering test scores for these students are equivalent to the high achievement that had long prevailed among local students.

“Cap” Hall, then dean of students, wrote in 1964 about Fritz as an “outstanding member of the football and hockey teams, and captain of the tennis team; and a diligent and painstaking scholar with excellent powers of concentration.” That comment foreshadows Fritz’s interest in the quality of the athletic experience for Milton students. Fritz launched the trustee-faculty committee that explored athletics at Milton; the committee’s report set recommendations for strengthening the program, and included hiring Milton’s new athletic director.

Fritz was chosen to represent Milton in the MIT Science Symposium of 1964; his interest in the field may have led to his passion about the importance of outstanding teaching and learning in science. He set a similar trustee-administration-faculty panel to work exploring science at Milton. Recommendations from that committee’s work, completed in 2003, have served as a blueprint for new requirements, a new curriculum design, and ultimately the design for the Pritzker Science Center, due to open in December 2010.

Among Fritz’s favorite events during his tenure were evenings when the board gathered to celebrate faculty by recognizing new faculty chairs. These events celebrated the skill and expertise of Milton faculty and thanked them for their dedicated support for individual students—those whom faculty nurture and guide every day through academics, extracurriculars or life in Milton houses. Those gatherings provided Fritz the opportunity to express his own appreciation for the vital role of the faculty in shaping the Milton experience.

During Fritz’s participation on the board and his leadership as president, Milton completed the Athletic and Convocation Center; the Schwarz Student Center; the renovation of central academic buildings; the new dormitories, Millet and Norris houses; and fulfillment of a vision for a new role in science education is now underway.

Fritz’s abiding questions about all the Milton issues that the board has considered during his time reflect his consistent focus: “What does excellence look like?” and, “What will it take to make that happen?” For nineteen years, and particularly over the last eight, Fritz has provided endless hours of dedication and extraordinary financial support to his alma mater, making sure that all aspects of a Milton education excel; that Milton preserves its traditional character; and that Milton set the highest standards for its future.