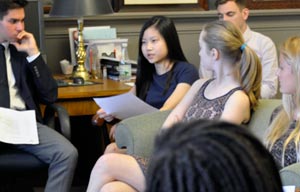 Discussing topics ranging from Revolutionary battlefields to post-World War II fashion, student winners of the Bisbee Prize gathered with history department faculty last Thursday afternoon for tea. The 12 winners, selected by their teachers for outstanding research on their U.S. History papers, gave brief introductions to their work and fielded questions from faculty and their peers.

Several prize winners were inspired in choosing their research topics by this year’s Henry R. Heyburn ’39 Speaker, Professor Bonnie Miller, who talked about how images and other popular images can shape the politics of gender and race. Brie Lawson (II) researched the role that propaganda and mass media had in leading the United States into the Spanish-American War, saying, “The American media pushed the U.S. into the war by influencing popular opinion with sensationalism and entertainment.” Students also studied how negative, stereotypical images of racial and ethnic groups played a role in systemic discrimination and oppression, as well as how propaganda stirred up mass fear of communism and nuclear war in the mid-20th century.

Winners of the 2016 Bisbee Prize are:

Edward Beaudoin
Elements of Victory at Bunker Hill and Saratoga

James Dunn
Radical Sedition: Systematic Persecution of Aliens During World War One and the Trial of Sacco and Vanzetti

Sophie Edouard
The Failure of Reconstruction

Caleb Rhodes
Making the Chinese Exclusion Act of 1882: The Path from Western Grievance to National Policy and the Demonization of the Chinese in America

Marshall Sloane
The Camp David Accords: A Shortsighted Agreement Formed Out of Political Necessity and Selfishness

Benjamin Smith
Armchair Anxiety: A Time for American Fears of Communism in the Booming 1950s

Melody Tan
Radiation Therapy, The Unclear Fear of the Nuclear