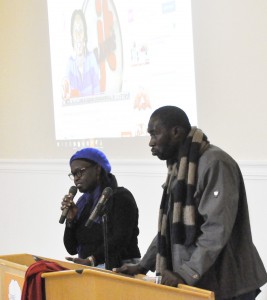 Two visiting Sengalese artists spent Monday morning with students who study French for an in-house field trip. Zeinixx, a graffiti artist and poet, and Karismatik Diksa, a hip-hop producer and rapper, are both Global Artists in Residence at Arts For Humanity Voices in Boston. The event was sponsored by Milton’s Francine L. Bustin Memorial Fund.

The morning began with a screening of compilations from the “Democracy In Dakar” documentary, which showed how the vibrant music and art scene in the Sengalese city inspired a youth voting movement. Then Zeinixx and Diska spoke in French about the work they do and answered students’ questions in both French and English.

Zeinixx uses her art for social issues and promotes the rights of women and girls in Senegal. She recently spoke at the United Nations about a project that provides digital arts training for young women in Dakar. Diska is the CEO of Alien Zik Studio in Dakar and also works with local youth on sound design, multimedia presentations, and voicing social and political change through art.

The two artists conducted two separate workshops—students could choose to work on slam poetry with Zeinixx or music production with Diska. The two groups came back together, and students performed their poetry and music.

The Francine L. Bustin Memorial Fund allows Milton’s modern languages department to host scholars, lecturers, artists and musicians. Mme. Bustin, for whom this fund is named, taught French at Milton from 1973 to 1984. Thanks to the generosity of the Lehner family and friends of Mme. Bustin, the Bustin Memorial Fund exists “to enrich and enhance the French language which Mme. Bustin taught with such eloquence.”