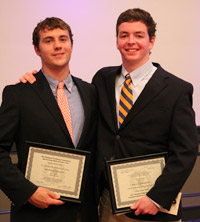 Teammates. Roommates. And now award recipients. Charlie Storey (I) and Ben Ticknor (I) were named Scholar-Athletes by the Eastern Massachusetts Chapter of the College Football Hall of Fame. Thirty-three Massachusetts student athletes were recognized for their academic achievements at an awards ceremony held on May 9. Their names will be engraved on a plaque that hangs in the College Football Hall of Fame in South Bend, Indiana.

Ben agreed that receiving the award was “awesome, because there are not many league or prep school athletic awards that recognize the hard work we put into our classes.”

This year, Ben’s favorite class was Nuclear Physics. For Charlie, it’s usually math or science, but this year it was English with Mr. Connolly.

Charlie was starting quarterback the past two years and Ben played running back. This past fall, Charlie was injured in the third game and missed most of his final season.

“It was hard, but I also gained from the experience. I had so much support from teammates. They made me feel like I was huge part of the team. They were more like a family, which was great.”

The two young men take away many great football memories from Milton, but for both the standout moment was this past fall’s epic win over Nobles in double overtime. Both Ben and Charlie will attend Dartmouth in the fall and the two feel prepared to play Big Green football.

“We learned so much from the incredible coaching staff here. Coach MacDonald and his assistant coaches, many who also once played for Coach. They’ve taught us everything we know.”