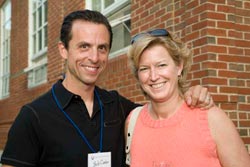 Bob Cunha ’83 P’15 ’19
Bob Cunha is a principal at Market Metrics, a market research firm whose clients are leading providers of financial services.  He began his career at Monitor Group, a strategy consulting firm based in Cambridge, Massachusetts, where he worked with senior managers in the fields of finance, industrial equipment, and telecommunications. Bob subsequently joined BellSouth in Atlanta and served in several capacities, including president of BellSouth Products. He later became president of Artisan Network, a venture-backed Internet firm, and served as executive director of Cape Range Wireless, a publicly traded telecommunications equipment supplier.

A graduate of Harvard University, Bob also attended the University of Western Australia in Perth, where he studied sociology under a Rotary Fellowship.

Bob and his wife, Kathy, have two children, Margaret (Maggie) ’15 and Charles (Charlie) ’19.  Bob chaired the Annual Fund and was an extraordinarily successful solicitor for large Annual Fund gifts and six-figure capital gifts.  As part of the K-12 Fundraising Committee, Bob helped secure commitments from parents and focus those gifts on the K–12 School.

A resident of New York, Lisa has been an active and effective volunteer for Milton. She is a member of the Head of School’s Council. Lisa chaired her 25th Reunion Committee and she also established an endowed fund that supports a female student who demonstrates academic and athletic excellence.