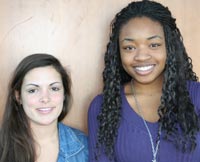 Nicolette Gendron and Chinenye Ikoro, both Class I, will represent Milton Academy as finalists in YoungArts Week 2011. They were chosen from among 6,000 applicants in nine disciplines in the visual, literary and performing arts to participate in the unique, weeklong event that will take place in Miami in January.

Nicolette won for her nonfiction piece “Can you teach me to dance real slow?”  She also submitted in the short story and poetry categories. Chinenye won for two of her short stories, titled “Ash Wednesday” and “Owls.”

Both young writers say they draw from their own experiences when crafting their stories.

“I don’t write from my imagination,” said Nicolette. “The things I write about, I’ve either experienced, or I’ve heard about or witnessed. My writing is based on my real life. But I play off characters, adding details; I spin it a little bit.”

Chinenye said although it took her a while to realize it, she also calls upon her personal experiences in her work.

The two writers are different when it comes to process—where, when and how they write.

“I’m a morning person,” said Nicolette. “I’m an early riser. I’m always doing a thousand things. On trains and planes I can actually write a lot.”

“I’m most productive at night,” says Chinenye. “For some reason, I can’t bring myself to write in the day. And I have to be in complete silence. My process is kind of strange, because I will come up with an idea, and it will sit in my head for a couple of months before I actually sit down to write it. And I usually know how I want it to end, but not how I want it to start.”

Both Nicolette and Chinenye see writing as part of their future, and they are thrilled to be heading to Miami, where they will meet 150 students from around the country who excel in their arts disciplines.

“I’m excited to just be around people who are so talented—in things like dancing, choreography, painting,” said Nicolette.

YoungArts is the core program of the National Foundation for Advancement in the Arts. At the event, students will have the opportunity to win cash awards and the chance to become a Presidential Scholar in the Arts.