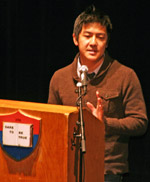 The twelfth speaker in the Hong Kong Series, Tze Chun graduated from Milton Academy the year in which the Series began, 1998. Tze’s artistic expression is broad, as is his success. He is a writer; a visual artist and painter; and a filmmaker.

Tze’s work in film may be most widely known. His debut feature Children of Invention premiered at the 2009 Sundance Film Festival.  The film won excellent reviews and fifteen festival prizes, at film festivals across the country.

As a writer, Tze and his partner Mike Weiss, recently served as screenwriters for Darren Star’s primetime drama on ABC, Cashmere Mafia.

After graduating from Columbia with a concentration in film studies, Tze began his arts career as a portrait artist. The CVZContempororary gallery in Soho represents his work, and his commissioned portraits hang in private residences in New York City, Los Angeles, Philadelphia, Boston and New Orleans. Tze also painted the original artwork for the poster of Anna Boden and Ryan Fleck’s Academy-Award nominated film, Half Nelson, as well as the children’s book drawings used in the film.

Many students at Milton recently worked with Tze’s sister, also an artist, who led Milton’s dance program in 2009, during Ms. Edwards’ sabbatical.