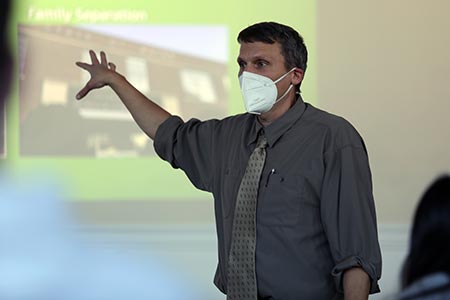 Change doesn’t happen overnight, but it’s still worth fighting for, said Christoph Strobel, an author and University of Massachusetts-Lowell professor and this year’s Heyburn Lecture visitor.

Strobel recalled being a college student in the ’90s and protesting Cleveland’s Major League Baseball team for its stereotypical and insulting depiction of Native Americans. The team, named the “Indians” since the early 20th century, will officially become the Cleveland Guardians beginning in the 2022 season—without its previous red-faced mascot, “Chief Wahoo.”

“Even if it takes time, it’s always worth making your voice heard,” said Strobel, an expert in Native American history, African history, and cross-cultural perspectives of North American history. “There have been psychological studies that show how negatively Indian mascots affect people, particularly Indigenous children. We need to figure out how our traditions impact people.”

He displayed the state’s coat of arms—an image that partially appears on the Massachusetts flag and seal of the governor—which depicts a stereotypical “Indian” figure holding a bow and arrow. Above the figure is an arm holding a sword pointing toward it; the state’s motto translates roughly to “By the sword we seek peace,” he explained. An earlier iteration of the coat of arms showed the figure saying “come over and help us.”

“It was a way of justifying colonization to the English,” Strobel said. “Our legacy of colonization is still there. Just getting rid of it doesn’t solve the problem; we need to educate people… (and we) need to recognize the impact of intergenerational trauma that exists to this day.”

“Never stop learning. It’s the best gift you can give yourself.”

Strobel, who grew up in Germany, recognized the solemnity and grief with which Germans remember the Holocaust; upon coming to the United States for college, he became curious about why the treatment of Native Americans is not acknowledged with the same gravity.

As Indigenous peoples were forced off their land by white settlers in a federally sanctioned genocide, and throughout centuries of North American history, the oppression of native people has been largely ignored, he said. Residential and boarding schools across the U.S. and Canada abused large populations of Indigenous children—many of whom were forcibly taken from their parents—punishing them for using native languages, driving languages and traditions to extinction, Strobel said.

Today, movements by Indigenous activists to save native languages and preserve cultures are gaining ground, he said. He encouraged Milton students to learn the real history and current issues facing Native Americans.

“Never stop learning,” Strobel said. “It’s the best gift you can give yourself.”

Strobel is the author of Native Americans of New England, The Global Atlantic 1400–1900, and The Testing Grounds of Modern Empire. With Alice Nash, he co-authored Daily Life of Native Americans from Post-Columbian Through Nineteenth-Century America, and he has published three books about immigration.

The Henry R. Heyburn ’39 Lecture in History Fund was established in 1991 to support an annual lecture in history. It commemorates Heyburn’s love of history and geography and his many years of association with Milton as a student, parent, and trustee.