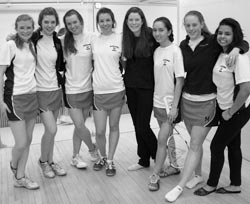 Milton’s girls’ varsity squash team finished their season with an impressive 11-0 record, marking only the second undefeated season in the history of the program. Winning 68 of 77 matches this season, and competing in the strong Independent School League (ISL), the girls earned the title of 2009 ISL Champions. Senior co-captains Alli Rubin and Sarah Loucks were members of Milton’s first undefeated team as seventh graders, and led this year’s team along with other Class I members Casey Cortes, Amara Warren and Caroline Palmer. According to coach Chris Kane, Milton’s Class of 2009 graduates some of the most talented female squash players in Milton Academy history and in New England.
In addition to their league success, the team finished second in the Groton Invitational, fourth at the New England Interscholastic Tournament, and a remarkable fourth at the U.S. High School National Championships. The fourth place finish at Nationals matched the best finish in School history and gave the girls the unofficial title of “Best of the Boarding Schools.”