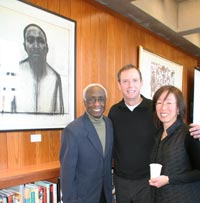 Milton Academy’s recently mounted etching of Martin Luther King is expressive, complex, intense and striking. The drawing of Dr. King is the work of artist John Wilson, born in Roxbury, Massachusetts, in 1922. Mr. Wilson was selected in 1985 as the winning sculptor in a national contest to procure a bust of Martin Luther King for the U.S. Capitol Building. Mr. Wilson’s drawing—a study for the sculpture—was recalled by its original lending institution from a traveling exhibition sponsored by the Smithsonian celebrating Rev. Martin Luther King, Jr’s life and message. Artist, printmaker and Milton parent Jim Stroud suggested to Mr. Wilson that together they immortalize his drawing by rendering it as a copper plate etching. The marriage of drawing and copper plate was a challenging one. The two worked for months and developed successive, but less than satisfactory, results before the final image. In fact, 20 state proofs pulled from the copper plate witnessing the painstaking effort are now owned by the Boston Museum of Fine Arts. Jim Stroud and Janine Wong, parents of Ryder Stroud, Class I, made the decision last month to give the Wilson etching to Milton. Milton was especially fortunate that John Wilson was able to join Jim, Janine, students and faculty as the work on the wall of the Cox Library was unveiled and admired.The renowned painter, sculptor and printmaker John Wilson graduated from Tufts University in 1947 and studied in Paris and Mexico City. He served as professor of art at Boston University from 1964 to 1986. He won prizes in national exhibitions from 1951 to 1969. His work is in the collections of the DeCordova Museum, the Smith Museum of Art, the Museum of Modern Art, and the University of Wisconsin. His most notable work, Eternal Presence, is at the Museum of the National Center of Afro-American Artists in Boston.