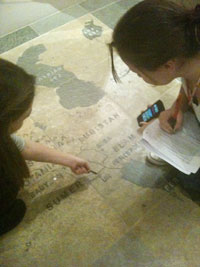 The many educational and cultural options within minutes of campus allow faculty to work in field trip experiences that enhance their classwork. Over 60 Class IV students in Modern World History visited the Forbes Museum in Milton, the former home of the Forbes family, China trade merchants in the late 18th and early 19th century. Museum guides led students through the house to view artifacts the Forbes brothers acquired on their voyages to and from China. Back in the classroom, student discussed what they saw as they completed their consideration of the China trade and industrialization.

The Ancient Civilization classes took their annual field trip to the Museum of Fine Arts to tour the Ancient China, India, Egypt and Persian/Assyrian/Middle East exhibits. The visit wrapped up their fall curriculum and deepened students’ understanding of Hinduism, Jainism, Buddhism, Daoism, Confucianism as well as the political histories in Egypt and the Middle East. Students wrote about what pieces they found interesting and challenging and issues that related to their classroom work.

“The collection that I most connected with our work was the section on the ancient Middle East. When I saw Ur on the stone map, a map from thousands of years ago, the civilizations of Mesopotamia became more than just people in a book,” wrote one student. “Another set of artifacts that caused history to come alive for me were the roof tiles from ancient China. I thought, ‘If I could see what these have seen, how much would I know that was supposedly lost to history forever?’”

U.S. History students had an early morning viewing of the film “Lincoln” at a local theater. Students watched the acclaimed drama that presents an artistic vision of the final turbulent months of Abraham Lincoln’s presidency.

The Advanced Portfolio Drawing/Painting class traveled to the Museum of Fine Arts one morning and then the Institute of Contemporary Art in the afternoon.

“These visits in sequence stimulate a wonderful physical understanding of the arch of art history, from the arts of antiquity, through classicism, to modernism and post-modernism, and finally the most contemporary conventions of art-creation,” says Ian Torney, arts faculty member.

The students’ assignment was to critically deconstruct a particular artwork in each museum that they might identify with in conjunction with works they are currently developing in class. For example, at the MFA the class did a “deconstruction” of John Singleton Copley’s “Watson and the Shark,” followed in the ICA with a similar critique of a contemporary work taken from that same painting, “An Eminent Painter” by Dotty Attie.