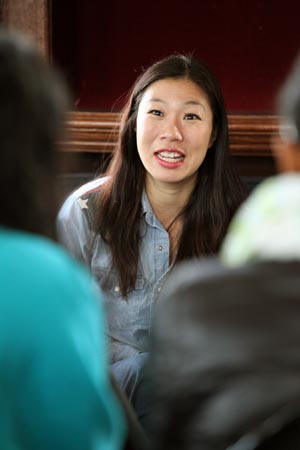 “What do we do when we are the problem in the room?” Kristina Wong asked Milton juniors and seniors. “How do we create equity?”

Ms. Wong opened the show poking fun at her own armchair activism: taking up social-justice causes, she would challenge other social media users, searching for the validation of likes and shares. Writing sensationalized online content could reach a far greater audience than a previous show in which she tackled issues of depression and suicide among Asian-American women.

During the performance at Milton, Ms. Wong, a third-generation Chinese American, wondered aloud about her legacy of anti-racism and fighting for equality: tweets and online commentary would not change the world. “Only a small percent of my time, I would engage with the outside world I spent most of my day critiquing,” she said.

With a good dose of self-deprecation, she described her plan to leave a mark—she went on a three-week trip to Africa to volunteer with a group offering micro-loans to women entrepreneurs. Ms. Wong said she was naïve, entering northern Uganda laden with American biases about people in developing countries: that “African” was a monolithic culture, that every place would be war-torn and dangerous, that poverty would be inescapable.

It was in Uganda that Ms. Wong was first treated like a white person. Having always associated with communities of color in the United States, she was surprised when Ugandan people called her white or European.

“Just because I’m part of a marginalized group here in America, doesn’t mean I don’t represent the face of colonization and oppression there,” she said. “I began to understand that I was seeing through the wrong lens.”

Ms. Wong told students people can support others in creating equity by fully understanding the needs of specific communities, not necessarily by showing up for a brief period of time. Providing necessary resources and support for others to lift themselves up can make a powerful difference, Ms. Wong said.

In a Q&A following the performance, Ms. Wong said that humor is a good tool for starting challenging conversations about social issues. Ms. Wong’s most notable touring show, “Wong Flew Over the Cuckoo’s Nest” examined the high rates of depression and suicide among Asian-American women through a fictionalized version of herself. She has been a commentator for American Public Media’s Marketplace, PBS, VICE, Jezebel, and the Huffington Post. She has appeared as a guest on Comedy Central’s “The Nightly Show with Larry Wilmore” and “Totally Biased with W. Kamau Bell.”

The Hong Kong Distinguished Lecture Series brings to campus speakers who help raise our awareness about issues of concern in Asia, and help us better understand the cultures, art and history of Asian countries. Former Trustee Helen Lin ’81, along with more than 100 Milton graduates living in Hong Kong, established the series in 1998.