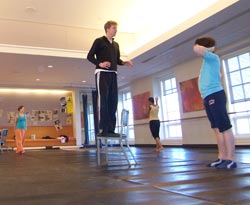 Earlier this month, alumnus Samuel Pott brought his talents back to Milton for two weekend-long rehearsals with students in Kelli Edwards’ dance program. Sam, most recently known for his work as lead dancer with New Jersey’s American Repertory Ballet and his company, Nimbus Dance Works, is the choreographer for Bloodlines 1944, a performance that will be included in Milton’s annual Winter Dance Concert from March 1-3 in Ruth King Theatre. Some rehearsals included the full cast of dancers and others involved Sam working one-on-one with individual students and duets.

“[Rehearsing here] was a fantastic process—the Milton students look good and it was great to see how far they came over the course of the two weeks,” said Sam. “It’s interesting to work with high school students because they are really passionate and willing to give their all to a project.”

Sam as a choreographer, both independently and with his company, has been focused on the intersection between high-level concert dance performances and the involvement of communities and audiences.

“We have different program offerings for creating dance projects in communities, and Bloodlines 1944 is one of these programs,” says Sam. “It stands alone as a compelling performance piece, but equally important is the process that leads to the final production. Students connect with someone from their life who was alive in the year 1944. The piece serves as a kind of channel for the dancers to explore that era and the person they choose.”

Originally from New York City, Sam began his dance training at the University of California, Berkeley, and completed his Bachelor of Arts degree in 1999. Sam has performed as a lead dancer with New Jersey’s American Repertory Ballet, the Oakland Ballet, Savage Jazz Dance Company and San Francisco’s Kunst-Stoff among others. He has performed lead roles from a wide range of dance styles and choreographers including works by Marius Petipa, Martha Graham, Jose Limon, Twyla Tharp, Charles Moulton, Val Caniparoli; he has created numerous original roles in contemporary works.

In 2005 Samuel founded Nimbus Dance Works, a company dedicated to building meaningful connections between concert dance and community. His choreography has been shown in New York City and throughout New Jersey and California. A member of the New Jersey Arts Council’s Arts in Education roster of artists, Sam has taught dance to multiple age groups and levels. He was awarded the Coca-Cola Scholarship for Artistic Excellence by the Martha Graham Center for Contemporary Dance in 2000. Additionally, Sam is training to be certified in the Feldenkrais method.