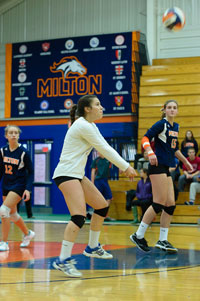 With chanting fans packing the ACC, the atmosphere was electric as the girls’ volleyball team faced off against Nobles and Greenough in the final game of their regular season. The Mustangs blocked and spiked their way to a thrilling 3–0 victory. With only two losses to ISL teams this season, this win clinched the league championship title and earned the team a spot in the New England playoffs.

“For that hour and a half, the girls were rock stars out there,” says Derek Palmore, varsity coach and Middle School faculty member. Last year the team finished strong, but this season surpassed all expectations.

“The girls sustained such high-level play this season,” says Coach Palmore. “As a team, they had incredible turn around and recovery time. So if we found ourselves down a few points or lost a match, the team did a great job moving forward quickly.”

This marks the first time in over a decade that the team has made the playoffs. Though they fell to Phillips Andover in the first round, captain Marina Fleites (I) credits both Coach Palmore and Assistant Coach Fang Yuan with bringing the players up to their A game.

“In practices, we would split up,” she says. “Defense players went with Coach Fang, because that is his specialty. Coach Palmore focused on offense. This way we worked on a lot more technique, got specific feedback, and then brought it all together as a team.

Most players pick up the sport in high school, because volleyball programs are not as entrenched in New England as they are in warmer parts of the country. Marina is the most seasoned veteran on the team, playing since her freshman year.

“I’m so excited we made post-season,” says Marina. “I remember as a freshman looking up at the banners hanging in the ACC, and all I wanted was a banner for volleyball. And now we have one! I am so proud of the team. Everyone played amazingly well against Nobles, and the energy of the crowd certainly helped.”