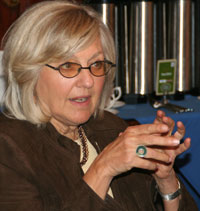 “Life is not a straight line; you will continually be changing while you prepare yourself at the same time,” Pulitzer Prize-winning columnist Ellen Goodman told students on March 30 while reflecting on her journalism career and life lessons learned.

“We need to remember the way real life works. You make plans, you have accidents; you move straight ahead, you take a detour; you screw up, you recover; you try hard, you get lucky; you carefully make a five-year plan, you succeed because you improvise. You keep proposing and recomposing your own life.”

Ms. Goodman was the Margo Johnson lecturer at Wednesday’s assembly in the Fitzgibbons Convocation Center. The Margo Johnson Lecture, named for the head mistress of Milton Academy’s Girls’ School from 1941 to 1982, brings accomplished women to Milton’s campus.

Ms. Goodman explained that she did not set out to become a journalist, as a recent college graduate with a history degree. She shared stories from her early professional years when discrimination against women was still legal and there were separate listings for male and female jobs in the help wanted section. Like many female journalists from her generation, she started as a researcher for a news magazine, where all the writers were men. Realizing she could write—and was good at it—she forged a career as a reporter and began writing columns in the early ’70s, when the women’s movement was in full force.

“One of the great things about being a journalist has been chronicling all of this social change. My column always strived to tell about life the way we experienced it. I wanted to write about the connections between the personal and the political.”

“The best part of being a journalist is getting the chance to ask absolutely anything from absolutely anyone. You make your living finding stuff out, finding answers for things you were always curious about. You get a chance to help change the world you live in. You do it by telling people what is going on, by rallying people to change things that are wrong.”

Despite tremendous changes in today’s media industry, Ms. Goodman said there is still a huge market for journalism.

“Even if newspapers diminish, news is expanding, and the places we can write are also expanding. People need trusted guides to help them understand the speed of change. There is no better way to grow up in our society than as an observer, a chronicler, a writer, someone paying attention and sharing with others what’s going on. There really is no more interesting life than asking questions about your world.”