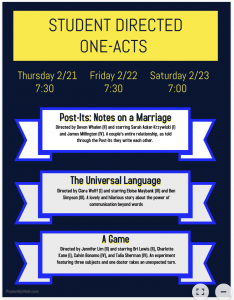 The student one-act plays are a venue for student directors and actors to showcase their talents in a broad array of plays and topics. This year there are three one-acts, completely directed, acted and tech-supported by students. Jennifer Lim (II) is directing “A Game” which stars Brie Lewis (II), Charlotte Kane (I), Calvin Bonomo (IV) and Talia Sherman (IV).

“I chose ‘A Game’ because this play demonstrates the complexity of the human mind and human emotion, and the play’s high intensity would also capture the audience’s attention,” says Jennifer. “In addition, our own interpretations of what the human mind and consciousness is to us would leave room for interpretation. This play demonstrates the power and impact of our words.

“Directing this past season has been a positive experience for me. I have staged managed for Milton productions, but I did not have directing experience. Watching Mr. Fuller, Mr. Parisi, and Ms. Anastas direct in the past has helped me a lot. It was a very exciting and rewarding experience for me to be able to apply what I have seen and learned in the past.”

“Post-Its: Notes on a Marriage” directed by Devon Whalen (II) and starring Sarah Acker-Krzywicki (I) and James Millington (IV) is about a couple’s relationship as told through Post-Its they write each other.

“The Universal Language” is directed by Clara Wolff (I) and stars Eloise Maybank (III) and Ben Simpson (III). It’s a comedy about the power of communication beyond words.