What Happens When Centrists are Marginalized? Seminar Day 2016 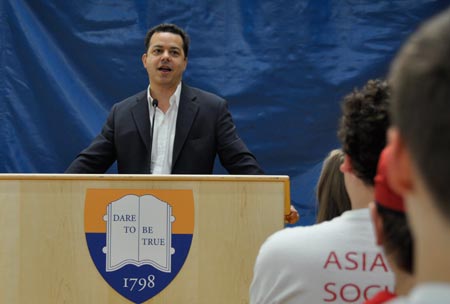 “If you’re tempted to disengage from politics as a result of this surrealist campaign, don’t” students heard this morning from John Avlon ’91, editor in chief of The Daily Beast and a CNN political analyst. Ceding political debate to “hyper-partisans” is partly to blame for the highly polarized state of Congress and political campaigns right now, he explained. John Avlon launched Seminar Day 2016 as the Sally Bowles ’56 Keynote Speaker. John has long advocated for the power and importance of political centrism, a level of discourse that has before and can again generate real progress in the United States. He has written Independent Nation: How Centrists Can Change American Politics as well as Wingnuts: How the Lunatic Fringe is Hijacking America. Earlier in his career John was a columnist and associate editor for The New York Sun, and a chief speechwriter for New York Mayor Rudolph Guliani. He won the National Society of Newspaper Columnists’ award for best online column in 2012. Avlon has appeared on “The Daily Show” with Jon Stewart, “Real Time” with Bill Maher, PBS, and C-Span.

“Why should we be engaged?” John asked rhetorically, “because it’s our job as citizens to get engaged. We know that there are bullies in life, and the best response comes from responding with strength.” People need to stand firm against the politics of division; they need to oppose the “us vs. them” analysis of issues. “Both parties are polarized,” John noted, “therefore they won’t function, as they should, to cool our passions and help us govern together, as they have in the recent past (witness the Marshall Plan, the national highway system, and civil rights legislation).” Mutual respect has dissipated, and “now we have all the disadvantages of a parliamentary system and none of the advantages,” he says.

Marking this presidential campaign as “weird, deeply off center, not without precedent, but a live fire moment,” John described the polarization and populism that we are witnessing.  He argued that the emergence of strong populism was easy to predict, especially in the wake of the 2008 depression, when the rising tide afterward did not lift all boats. Many factors colluded to serve up our current “symmetrical polarization,” a reality in both parties, but more activist and ideological among Republicans, especially Tea Party Republicans. The total ineffectiveness of Congress and the rigged system of redistricting, where politicians choose the people as opposed to the opposite, are major factors.  When satisfying the core of your constituency will keep you in office for a lifetime, what is your incentive to reach across the aisle? The rise of partisan media, which has allowed journalists to come to the table “armed with their own facts,” has fed the divide as well.

John recalled the “Northeast Republican tradition of fiscally responsible, socially inclusive politicians.”  He pointed to the election of Ed Brooke, a Republican elected in 1966 from Massachusetts and the first African American senator. He defeated former governor Democrat Endicott Peabody in a landslide, and served two terms. Today, the center right in American politics has been forced out of the picture and “being responsible is a net negative” in today’s campaigns.

“When you’re on the fence between apathy and engagement go toward engagement,” John urged students. Debate with a sense of perspective. We will have real work to do after this election.  You vote with your eyeballs and your wallet, every day.  You have impact and you have an obligation; a leadership opportunity is being handed to you. …At the core, commit to your independence.”

Sally Bowles ’56 Keynote Speaker, John’s keynote speech fulfills the wishes of Sally’s family and friends that speakers come to campus who reflect the intellectual curiosity and rigor that marked Sally’s pursuits, as a student and a professional. Sally was focused on big, bold ideas affecting millions of people. She was on the team that developed the Peace Corps; she helped decentralize New York City public schools; she was the director of Medicaid and ran Connecticut’s welfare programs. Over time, and thanks to this Fund, students will listen to a wide range of perspectives on issues critical to the health of society in the United States and around the world.

Fourteen other experts and activists followed the keynote address, covering a wide range of publicly debated domestic and international issues.  Among many topics, students could choose to learn about the law and politics of women’s health today; the direction of workplace automation; the economic impacts of digital transformation; how terrorists recruit and how governments can stop them; or whether the giant banks should be broken up.  Many Milton Academy graduates and several parents were among the guest speakers, stimulating great questions and discussions.