“What is Your Vision for the World?” Russell Weatherspoon Asked Students at the Onyx Assembly 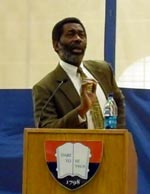 An eloquent Russell D. Weatherspoon, dean of residential life and religion teacher at Phillips Exeter Academy, encouraged Milton students to draw on the philosophy of Martin Luther King Jr. as they contemplate their futures. Mr. Weatherspoon was the Martin Luther King speaker; his original presentation had been postponed due to one of this winter’s severe storms.  Mr. Weatherspoon spoke to Classes I-IV at the Onyx Assembly in the Fitzgibbons Convocation Center.

“Think of yourself in 30 or 40 years. Who do you want to be when you get there? What do you want the world to look like when you get there? What are you planning to do to make things happen? Things don’t happen because we think about them. They happen because people join forces to make them happen. What are you going to get engaged in and who are you going to join forces with?”

Mr. Weatherspoon recalled his early years growing up in New York City in the ‘50s and how MLK represented a black southern community that seemed unrelated to the world of New York.

But as a young teenager, Mr. Weatherspoon grew to realize and to witness that racism all around him, even in a city as diverse as New York.  He was drawn to the Civil Rights movement, but he and others of his younger generation sometimes questioned and mocked Dr. King’s message of love, not violence. Mr. Weatherspoon mentioned a visceral hatred he had, at that time in his adolescence, for a particular Southern politician.

“Eventually, I came to a place where I realized I could not live out of that hatred and anger. Martin’s underlying philosophy was that you have to resist evil with good. If you want to change the other person, you have to believe that the one who hates you is worthy, and that ultimately, you can win that person with love.”

Mr. Weatherspoon reminded students that Martin, as he called Dr. King, was a strong advocate for the poor and said the country is once again in a moment where we need to ask questions about economic inequality in our society.