“What words will you choose to live by?” Stephen Elliott ’99 is this year’s Veterans’ Day Speaker 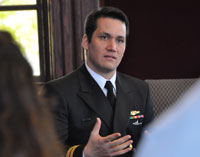 After reminiscing about Milton faculty and life in Goodwin House, Stephen Elliott ’99 urged students at the Veterans’ Day Assembly to consider a future in public service.

Having studied engineering and computer science at Yale, Stephen became a commissioned Naval officer in 2004 and served on the USS HENRY M. JACKSON, a ballistic missile submarine based out of Bangor, Washington. He told students how a recruiting poster hanging in the hallway of his engineering school planted the seed of his joining the military, which was not his goal going into college. His final decision was based on what the military represented to him, even though some military traditions went against his own personal beliefs.

“The most important skill I learned at Milton was how to ask meaningful questions in search of the truth. There was never a shortage of conversations or debates that challenged my beliefs and my values. Few places after Milton offered this to me, but the military did; I joined the Navy to, once again, be in an environment that challenges my beliefs and values.”

Stephen said he also drew upon the words of a Yale graduation speaker who warned that too many young graduates were “noisy but irrelevant.”

“The lesson I took from that is if you want to make a difference, you have to be relevant,” said Stephen.

He discussed the importance of his failures and success in the Navy and told students that the process of “stumbling and recovering” is critical in life.

Stephen is enrolled in a dual program at Harvard Business School and the Harvard Kennedy School. After earning his degrees, he plans to move to the West Coast and work in the clean technology industry.