Who Came to Milton This Fall 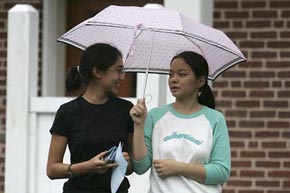 The 2004-05 admission process began with nearly 1,000 applicants over one year ago. This September, at the beginning of its 207th academic year, Milton Academy welcomed 153 chosen students to campus. Among them are 70 boys and 83 girls. They come from 22 states, nine countries and collectively speak at least 16 languages. Forty-four percent define themselves as students of color and 40 percent come from public schools. Prior to attending Milton, most earned straight A’s and scored in the 88th percentile on the SSAT test. Six students ranked number one in their class. Twelve were elected president of either their class or Student Council, and 15 were captains of at least one athletic team. According to Paul Rebuck, dean of admission, “They are athletes who paint, painters who love math, and mathematicians who dance.”