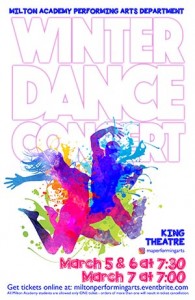 The Winter Dance Concert represents the best mix of creativity and physical prowess at Milton, says Nyla Sams ’20, a dancer and choreographer in this year’s performance.

“It combines music, culture, athleticism, and beautiful visuals into two entertaining hours,” she says. “Also, everyone is in dance concert! You have die-hard theater kids and football players on the same stage. Everyone is there to support one another and have fun, so the energy is just amazing.”

“This year, there are about 75 students dancing, a crew of about 10, and we’ll have a few more set pieces,” Kelli explains. During some years, the set is fairly bare-bones, but this year, set pieces include a scene in a bodega and a modern dance using fabric hung from the ceiling.

Preparing for the dance concert involves a lot of hard work. Students balance their participation in the concert with their schoolwork, athletics, and club commitments, and they practice whenever they can.

“I’m most excited to see everyone come together for the run-throughs,” Nyla says. “The lighting, costumes, and energy culminate into a breathtaking show. You haven’t really seen what others are doing until you see the entire production.”

Aside from Kelli’s dance, students choreographed most of the show. Alli Reilly ’20 choreographed a tap dance set to live music that will be performed by members of the jazz band, and she and Emma Bradley ’20 have choreographed “a contemporary piece that looks into physically and emotionally abusive relationships and the strength it takes to break free from them.”

“Because the majority of dances are choreographed by students, dance concert gives us a platform to share our cultures and important messages with the entire community, which makes the show more personal,” Alli says.

Grace Li ’20 agrees, saying the work and creativity that goes into the planning and performance is what attracts the Milton community to the concert, an annual campus favorite.

“Seeing the ideas that your classmates have brought to life on stage is really powerful,” says Grace. “For me, dance is a social activity. So having the opportunity to dance with old friends and make new friends through dance is something I always look forward to.”