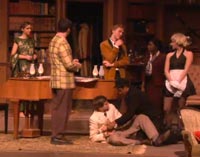 The complicated plot was filled with twists and turns, and the audience enjoyed a few surprises. Faculty member Shane Fuller designed the elaborate set and Swap-It items were well represented on the stage, from bookcase items to the sofa and desk. Oddly, the script only provided lyrics, not music, so faculty member Ted Whalen wrote original piano music to accompany the actors.

Watch the performance of Musical Comedy Murders of 1940.