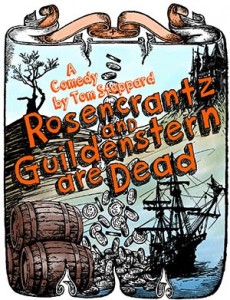 Two minor characters from one of the most well-known tragedies in theater history take the comedy spotlight in this year’s fall play, Rosencrantz and Guildenstern are Dead. The 1966 Tom Stoppard play follows the story of the title characters, messengers from Shakespeare’s Hamlet, who are bewildered by the events around them.

“The entire play is from their point of view, and tries to explain who they are, but they don’t even know,” says performing arts faculty member Darlene Anastas, who is directing the show. “They don’t get their names straight. They know they’ve been sent for, but they don’t know why. You ponder life and death with the characters, but it’s really very funny.”

Phoebe Mugford ’21 and Ben Simpson ’21 star as Rosencrantz and Guildenstern, respectively. Caitlin Waugh ’20 composed some original music for the show.

The main characters are “quite strange as individuals and as friends, so it has been fun and exciting to develop the roles,” says Phoebe. Stoppard’s wordplay has been a challenge to master, but the tight-knit cast makes for fun and entertaining rehearsals.

“The play focuses on what death means, in a comedic and light way,” Phoebe says. “It shows that the weight of death does not come from the death itself but from the disappearance of a person from the world. It’s made me think about death differently.”

The original Stoppard play pays tribute to Samuel Beckett’s Waiting for Godot in Rosencrantz and Guildenstern. The central characters have a mission, but the show is about what happens to them along the way. The Milton production references Beckett in its set design and stage directions.

The fall play is always a logistical challenge, as little time separates the play and the Class IV Follies just a few weeks before. The choice of Rosencrantz and Guildenstern made sense, Dar says, because the play can have any setting, and it has been popular in recent years. In 2017, the show saw a revival on Broadway for its 50th anniversary and this month, Boston’s Huntington Theatre finished its month-long run.

“It’s a lot of fun,” Dar says. “Finding the comic elements to it and letting the actors develop their understanding of timing. It’s an incredibly witty play.”