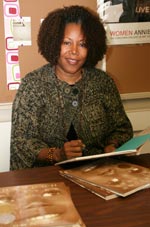 Millions of Americans have been moved, over more than four decades, by Norman Rockwell’s poignant illustration of Ruby Bridges, a six-year-old black girl walking into school alone except for the tall figures of male guardians that preceded and followed her. The image memorializes Ruby’s integration of the William Franz Public School in New Orleans, Louisiana in 1960. Today, Ruby Bridges Hall, along with her teacher at that time, Barbara Henry, often work together with teachers and students. On January 29 and 30, Ms. Hall was a guest at Milton, invited by the K–8 division. After spending a full class day in the Lower and Middle schools, visiting with Grades 6, 7 and 8 and then with Grades 2–5 in Thacher, she talked with Upper School history students about her experiences on Friday afternoon in Kellner.  From the Upper School, students in American History, U.S. and the Modern World II, History of Civil Rights and Senior Seminar in History had the opportunity to connect with a figure whose early bravery in the face of institutional racism affected the course of history.