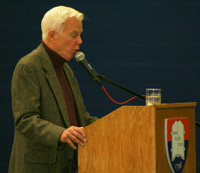 During World War II, Ned Handy, Class of 1940, was captured by Germans in April 1944, after his B-24 was shot down. Sent to Stalag 17, the infamous Nazi prison camp, Ned soon led an escape team determined to tunnel to freedom. Along with the unforgettable comrades he vividly describes, he worked relentlessly for months on a tunnel that was to prove instrumental in saving the lives of four fugitives sought by the Gestapo. One of those fugitives would become the only American ever to escape permanently from Stalag 17.

In 2004, Ned co-authored The Flame Keepers, a vivid first-hand account of an American soldier’s experience as a POW in Nazi Germany. Last year, Ned participated in Milton’s Advanced Oral Interpretation course project entitled Milton Generations: World War II.  On Wednesday, November 7, Ned returned to campus to speak about his experiences to the student body during this year’s Veterans’ Day Assembly in the Fitzgibbons Convocation Center.