Zakiya Lewis (I) Shares Her Story 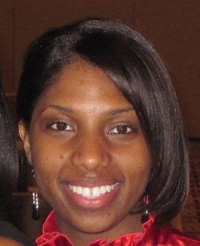 When Zakiya Lewis (I) was in fifth grade she was chosen to speak at her school’s annual fund-raising dinner. Mother Caroline, an independent middle school for girls in Dorchester, offers a quality education for girls whose families have limited financial means.  At the time, Zakiya had just ended her first year at Mother Caroline; she graduated as the school’s valedictorian, bound for Milton Academy. Now, at the end of her Milton years, Zakiya was invited to speak again  — this time to more than 400 people, including students, staff and donors.

“The theme of the night was ‘Rise’ and I spoke about how Mother Caroline helped me get where I am,” says Zakiya. “I wanted the students to realize the school was just their first step. It was the step that got me to Milton.”

Pamela Pleasants, the assistant dean of admission at Milton, introduced Zakiya at the dinner. “As a student at Mother Caroline Academy, Zakiya rose to the top academically, intellectually, socially and personally, but she was never above anyone else.  If you speak with anyone who knows Zakiya, they would mention the words humble and reserved to describe her.  As a student at Milton, Zakiya has risen to the occasion by not only by being an incredible scholar, but a formidable leader as well.”

Zakiya is on her way to Harvard University next year from Milton, and she credits Mother Caroline for preparing her for Milton. The only difficult transition was the size of the school. At Mother Caroline each grade is only 15 students, all from similar backgrounds.

“Milton seemed so much bigger when I first came,” says Zakiya. “But I adapted pretty quickly and I loved the diversity of the students. My favorite thing about Milton is the people. I have made such great friends here.”

Zakiya is involved with numerous activities at Milton.  She is head of the Christian Fellowship, co-head of the Caribbean Student Association, a member of Onyx and the girls JV basketball. She joins the ranks of other Mother Caroline alumnae who have graduated from Milton; two other students are following in her footsteps.

“Zakiya did a wonderful job honoring Mother Caroline and Milton for providing her with the educational foundation for success,” says Ms. Pleasants.  “She also honored her mother and her mother’s support of her.”