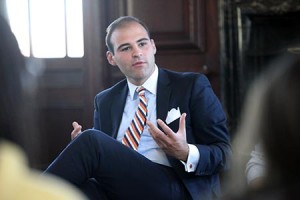 Max, a government contractor in the Office for Civil Rights at the United States Department of Health & Human Services (HHS), said that limiting students’ exposure to opinions they may find objectionable is counter to the purpose of academia. Campuses should instead be places for thoughtful debate and examination of several points of view, he said.

“Chief among those natural rights our founders identified is the freedom of speech,” Max said. “Unfortunately, the mindset on a lot of campuses is ‘You do you, as long as you agree with us on the right issues.’ This isn’t the free exchange of ideas. It’s an audition for ideological purity.”

In addition to broadening the discussion, opening debate to a variety of opinions helps people confront and expose—and ultimately invalidate—hateful and biased speech, rather than pushing it to the side, Max said.

Max shared with students his approach to conservatism, which he centers on the principles of the nation’s founders, a dispassionate study of the Constitution and history, and a limited role of government in citizens’ lives. “There is a moral basis for being able to choose your own destiny,” he said.

Max has been active on Republican campaigns at the local, state, and national levels. In 2014, he served as the youngest delegate for Massachusetts Governor Charles D. Baker at the Massachusetts Republican State Convention. While in college, he spent two summers interning in Washington, D.C.: first, in the summer of 2015, at the James Wilson Institute on Natural Rights and the American Founding, and, in the summer of 2016, at the B. Kenneth Simon Center for Principles and Politics at The Heritage Foundation. A former weekly contributor to Boston Herald Radio and regional field director for the Massachusetts Republican Party, Max has worked in Washington since January 2018, where he first served as a legislative fellow on Capitol Hill. He received his bachelor’s degree from Amherst College and will attend the Law School at the University of Notre Dame in the fall. Max noted that his opinions are his own, and was not speaking on behalf of HHS or the federal administration.