Arts in the News 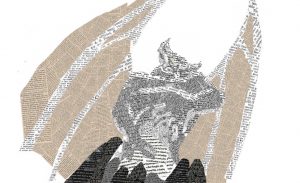 Abby Hanley ’20, a gargoyle based on the Chernabog character from Fantasia and used articles about the COVID-19 pandemic and the Spanish Influenza Pandemic

In Nicole Darling’s Technology, Media and Design class, students are learning about typography, which is the art and technique of type design, lettering, and calligraphy.

“It is arguably one of the most important components of graphic design. It requires designers to have the ability to make messages readable while expressing, emoting, and projecting concepts to the audience,” says Darling.

The unit consists of three different projects designed to help students develop their sensitivity to type, and increase their appreciation for different type-anatomy and aesthetics.

“In this first project students were asked to create a collage using found printed material,” says Darling. “The style and size of the letters, as well as the density of the text, are explored as graphic shapes and textures.” 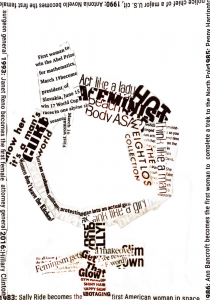 Caroline Wilson ’21, used text from a fashion magazine to look critically at the beauty industry and assert feminism. 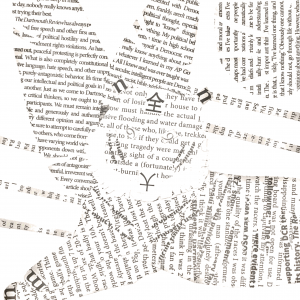 Danni Lu ’20, a tiger camouflaged in the jungle, for her mother who is born in that Chinese zodiac year 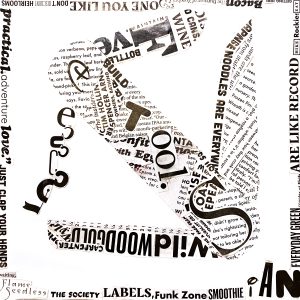 Ian Terrell ’22, “Pocket knife” (given to him by his grandfather) 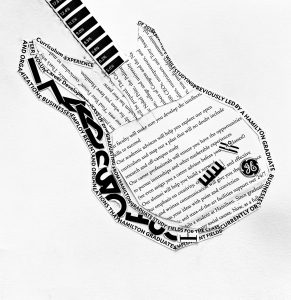 Ben Simpson’21, “Guitar” ( This is what he has been trying to learn during the coronavirus) 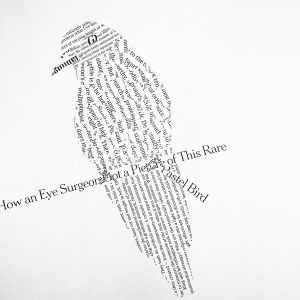 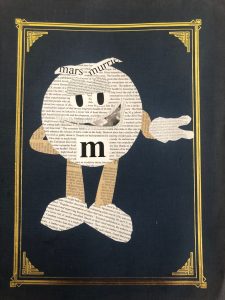 Performing Arts Department Chair Kelli Edwards has found creative ways for her Advanced Dance Choreography students to continue to learn and grow as dancers from the confines of their homes. For a recent assignment, students had a choice between creating a tight-space dance or creating a ritual dance.

Alli Reilly ’20 chose the first option, for which the instructions read: Embrace even more your lack of space and make a movement study based on a very tiny amount of space. No more than 3 feet by 3 feet. Your movement must include level change and traveling! And some sort of “big” movement that you would never think could fit in that space.

“Since remote learning started, some of my favorite assignments have been those for my Advanced Choreography class because of the freedom we have to dance in new spaces and incorporate film into our choreography,” says Reilly.

For this assignment she says, “I immediately thought of my closet. I propped my phone up in the one corner where it could balance on its own, and began choreographing with that camera angle in mind. I chose to dance to Billie Eilish’s ‘Hostage,’ using the piece as an outlet for some of the emotions I’ve been feeling as a senior during this time.”

Cariani wrote Almost, Maine, a play told through nine stories about love and loss in a remote, fictional Maine town. Milton students performed the show in February; Cariani joined members of the cast and crew—along with others who had planned to put on Milton’s spring musical, Urinetown—via Zoom to talk about the play and his career in theater and television.

Small-town life hasn’t always been ignored—plays from the middle of the 20th Century depicted nuanced suburban and rural lives—but political divisions seem to have created an “us vs. them” rift in American culture, with rural people often depicted unfairly as simple or ignorant in current media.

“I’ve figured out, kind of in the middle of my life, that I’m passionate about the way urbane, well-educated people treat rural people,” Cariani said. “I’m from a small farm town in northern Maine, and that’s what I write about. We’re taught that where we’re from is bad. I’m just asking people not to forget that multifaceted, intelligent people live in rural America. Contemporary American art and culture do not represent multidimensional rural and working-class people.”

Almost, Maine is one of the most produced plays in the country, and it is a popular student production. It opened in 2004 in Portland, Maine, where it received critical acclaim, and has run internationally, as well as for two months as an off-Broadway production, where reception was more mixed.

“I wanted it to go to Broadway, and I was so excited for what was going to happen,” Cariani told students. “None of those dreams come true. But there’s a great quote in Hamlet: ‘There are more things in heaven and earth than can be dreamt of in your philosophy.’ And that has been the case in my life. The things that I dreamt didn’t happen, but the things that have happened were better than what I could have imagined.”

When the pandemic started, work shut down for theater actors and crews; Cariani had been about to start performances of Caroline, or Change on Broadway when the coronavirus shut down New York theaters. Cariani wondered if there was a way he could make some meaningful contribution, and a teacher friend suggested he try to reach students who had recently performed Almost, Maine; the friend noted the challenges of teaching the arts remotely. Milton students asked Cariani questions about his script development, his use of humor, and the staging for the show, and he shared stories about the process of getting plays produced.

No one could have imagined the coronavirus pandemic playing out the way it has, Cariani said, especially the high school seniors who are missing in-person milestones. But the social-distancing measures during the pandemic do have a silver lining for creators: boredom. Great ideas occur to creative people in boring moments, he said, encouraging students to mine their quieter times for ideas. “Give yourself time to daydream,” he said.

Cariani has received numerous accolades including an Outer Critics Circle Award win and Tony nomination for his role as Motel the Tailor in Fiddler on the Roof, and an Outer Critics Circle Award nomination for his performance as Nigel Bottom in Something Rotten! He was on Law and Order for five years; other television appearances include The Blacklist, Homeland, and The Marvelous Mrs. Maisel.

Clowning Around in Improv Class

Even when they’re fully committed to a character, the best improvisers bring their own personalities to their performances, says Gemma Soldati ’09.

“These things are real, they’re part of who we are,” Soldati told the students. “You have to bring the truth of who you are to the stage. You’re not going to be successful onstage if you’re trying to hide.”

Clowning allows performers to play with power dynamics, absurdity, poignancy, and hilarity. A good clown—in the commedia dell’arte tradition rather than the big-shoes, red-nose tradition—can be a conduit for all kinds of emotions. Soldati and Dhaliwal have toured with their two-woman show, The Living Room, in the U.S. and internationally, winning the “Best Comedy” award at the 2019 Melbourne Fringe Festival in Australia.

The Living Room is described as a “comedy of grief,” in which the two play accountants of death, recording the death toll. It is a physical and participatory show, and the clowns’ bumbling idiocy is a vehicle for them to learn about life and death. Moments of discomfort on stage can be stretched for long enough to make them funny, or turned into tragedy.

Playing off one another and creating a story doesn’t always result in humor, but it’s necessary for good improvising and clowning, Soldati said.

“It’s not a competition to see who’s the funniest,” she said. “You need each other.” 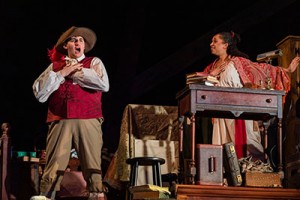 Based on the novel Little Women by Louisa May Alcott, the musical chronicles the lives of the March sisters—Jo, Meg, Beth, and Amy—and Laurie as they come of age in Concord, Massachusetts, during the Civil War.

Boyish charm, cracking through the real messiness of adolescence, is what director Nick Vargas wanted to find in Laurie, who ages from 16 to 21 during the course of the show, Max says. Laurie stumbles over his own words, and Max has to embody his insecurities. Every character has “genuinely human flaws,” he explains.

Max has a grueling schedule: Balancing eight shows a week and the rigors of a Milton education, he has had to manage his time with precision. Since Laurie is not in every scene, Max has squeezed in his school work during breaks in the action—he finished a paper on Antigone backstage one evening.

“When I have more stuff on my plate, my work either stays at the same level or even improves a little,” he says. “Somehow the little extra pressure seems to help me.”

Acting has been a part of Max’s life since he was at the Temple Israel of Boston’s preschool. At the age of 5, he got hooked on performing in the school’s version of Little Red Hen. He has performed in several Milton productions, including Class IV Follies and Rosencrantz & Guildenstern Are Dead.

For some years during his childhood, Max had a medical condition that affected his mood and emotions. Performing was a refuge. “I didn’t really understand what was happening around me,” he says. “Acting was an opportunity to be someone else for a moment. There’s something incredibly cathartic about that.”

The diverse, female-led cast has offered Max some powerful role models, he says. And their differences have helped shape the story.

“We have so many different voices coming into this production, so many different backgrounds,” he says. “It’s given a lot of new perspectives on questions ‘What is family?’ and ‘What is home?’ that haven’t always been included with this story before.”

The Wheelock Family Theatre is located on the campus of Boston University. Little Women runs through Sunday, February 23.